Passers-by at the Parc de L’Imaginaire will be able to enjoy this nocturnal projection on Fridays, Saturdays and Sundays from November 27, 2021, to February 27, 2022, from 6 to 10 p.m.

Gear’s new artwork Ullugialijak (which translates as Starry Night) explores systems of exchange, memory and Indigenous Futurism: he builds and imagines worlds. In this new video work, rings of collected and gifted materials from the land and sea — bones, shells, caribou antler, driftwood, and beadwork — slowly rotate in concentric circles to create a vast interconnected universe.

Ullugialijak departs from conventional film practices with its circular composition. Gear’s previous work has explored portals, notions of returning home, and non-linear storytelling which transcend time and space — key features of Indigenous Futurisms. These explorations are encapsulated within Ullugialijak, with its circular composition that relates to Indigenous cyclical understanding of time and space through the ephemeral material left behind within an interconnected ecosystem.

As an Anishinaabe curator, I see Gear’s act of animating each individual ‘object’ speaking to the extended understanding of materials, such as the shells, as living materials as demonstrated through Anishinaabemowin. English is a noun-based language, as in everything is named and, “acts or is acted upon.” This creates a dichotomy of what has agency and doesn’t, based on if it is ‘alive.’ Within Anishinaabemowin, how an object is conjugated is based on whether it is, or was made of, an animate or inanimate material. For example, beads are animate because ‘beads’ originally would have been made out of shells, bird feathers, berries and other materials shed by animals. All the materials pictured within Ullugialijak are animate and have lived lives — Labrador caribou antlers, mussel shells, seal vertebrae, scapula bones and beads.

Gear’s animation features materials gifted from and collected in Newfoundland and Labrador, and the majority from the sea. The location of the video projection is facing towards Kitchissippi, also known as the Ottawa River. Kitchissippi has long been a gathering place, dating back thousands of years, and remains a centre of power as the unceded territory of the Algonquin Nation. Throughout the duration of the exhibition, Ullugialijak will see the seasons change, the leaves fall, then the water levels lower and freeze. By coalescing the materials, and the individual stories and meaning they carry, into a larger interconnected, perpetually shifting, expanse — both within the video itself and the environment it’s installed — Gear is also situating himself within a network of interrelational and interspacial exchange.

On Saturday, November 27 at 6 p.m. at L’Imagier, with curator Franchesca Hebert-Spence.

Franchesca Hebert-Spence’s first engagements with art were as a maker, creating an emphasis on process and material within her curatorial praxis. She is Anishinaabe and her grandmother Marion Ida Spence was from Sagkeeng First Nation, on Lake Winnipeg, Manitoba. Kinship and its responsibilities direct the engagement she maintains within her community as well as her understanding of how institutions move and breathe. The foundation of this practice stems from Ishkabatens Waasa Gaa Inaabateg, Brandon University Visual and Aboriginal Arts program. She has begun as a PhD student in Cultural Mediations (Visual Culture) at Carleton University, as a Fellow on the Morrisseau Project under Dr. Carmen Robertson. She is an Independent Curator and previously served as an Adjunct Curator, Indigenous art at the Art Gallery of Alberta, and a Curatorial Assistant within the Indigenous Art Department at the National Gallery of Canada. 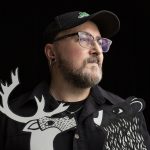 Glenn Gear is a Newfoundland-born, Montreal-based artist working in the field of experimental animation and intermedia. Gear finds inspiration by exploring his identity as an urban Inuk with ancestral ties to Nunatsiavut with his current work focusing on individual/collective histories, Indigenous and settler exchanges, folklore, gender and archives. He has worked in animation, video, drawing, collage and installation, often using experimental techniques in both digital and analog forms. Many of his animations have a dream-like quality, with narratives woven together through visual and metaphorical layers. His films have been screened in Canada and around the world. Gear recently finished a large installation featured in INUA, the inaugural exhibition of Qaumajuq at the Winnipeg Art Gallery (WAG) and was one of four Inuit artists long-listed for the 2021 Sobey Art Awards.